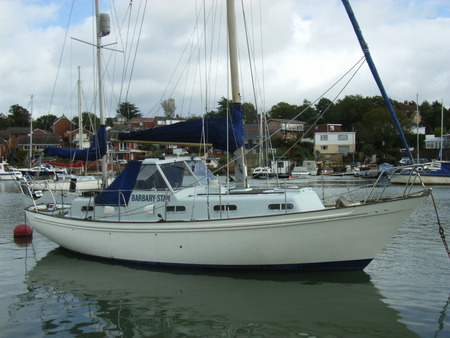 Barbary Star was owned by a couple on the IOW , who moored her at Wootton Creek , Isle of Wight . The places cruised / visited , length of owner ship etc reads very much the same as the Captain Nancy story by Ann and Peter.
Photos taken , B Star doing a sail past just off the entrance to Wotton Creek.

Barbary Star has since been sold to a new owner who has re named her to Patience of Poole and now moors at cowes . Photos taken of her passing Shepards Wharf , Cowes.

The mystery of “Jonathon” is now solved ( See Magazine Articles – test reports) Evidently before being called Barbary Star and Patience of Poole she was the original Jonathon.

Tom, the son of Piers (the previous owner)  took pictures of the journey back to Cowes from Vannes for the refit in July 2013. See these links.

The current owner is Poseidon Firth (Find him on Facebook) and he has notified me recently that Patience is now at Soverign Harbour in Eastbourne.