It is believed that Frederick Mitchell and Sons were the main builders of  the Barbary Ketch, utilising the hulls fabricated by Robert (Bob) Ives of Christchurch. Barbarys were not the only boats manufactured at Mitchells and I am indebted to Andrew McEwen for supplying us with information that fleshes out the history of this yard.Other Mitchell boats
I have tried to find out about the boatyard and any archives that may exist but I fear that all is in peoples memories now.
Mitchell’s boatyard was purchased in the late 90’s and whilst the company (Mitchell’s) still exists and is now owned by Parkstone Bay Marina, they are only a storage yard with launching facilities. The current Marina Manager informs me that there are no archives and the connection with the past has been lost!!!
One small but important point is that all Barbary owners will have a plaque on their boat saying what the job number was. This is NOT the number of Barbarys built but the number of the boat, whatever its type, built at the boatyard.
So the plaque below would not be the 298th Barbary and the 297th could have been a pram dinghy!! 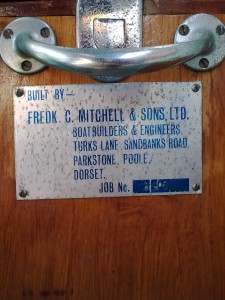 Fitted Out at Mitchell's 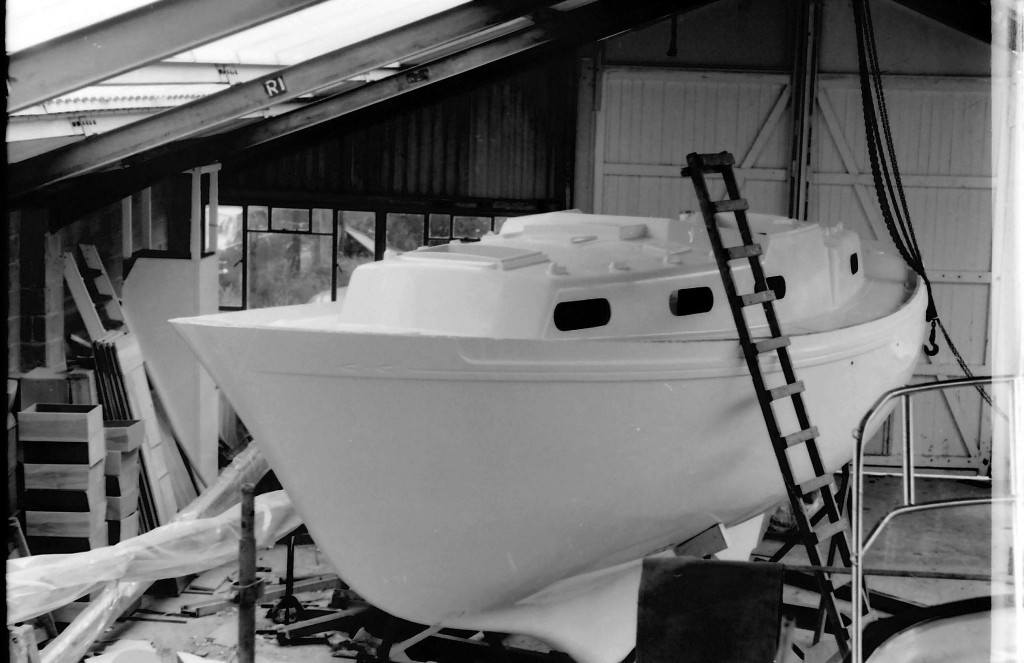 Taken inside the sheds of Mitchell's boat yard in Poole in 1972.

The picture above and the pictures in the gallery below were taken by a gentleman called Mike Floyd who worked at Mitchells in the early seventies.
Rather than paraphrase his story, I will reproduce his recent communications to me so that you can read as is
As a very young man I was sales manager at Mitchells in Poole from ’72 to about ’74 and may have done the original trial and handover sales for your boat – although I don’t recognise the name. I certainly recognise several other names (at least two of which I delivered to their first owners) and would love to have access to your members area. I remember ‘Tom’ Rayner well – an outspoken but lovable character he succeeded in bringing an Earls Court restaurant to its knees one Boat Show when asked how he enjoyed his steak… Slightly deaf when I knew him he ‘whispered’ in an Aussie drawl ‘Fine, except they forgot to take the saddle off mine…’
I’m now retired and living in France I don’t sail any more, although it was my life for most of my working life (I was also on the editorial staff of Y&Y for many years).
Below are more pictures of the boatyard in the 70’s
[Show as slideshow]

I’m really pleased to hear that you and Carole are enjoying your Barbary so much so long after she was built. They really were well built and used excellent materials – I was in the marine industry for over 20 years, one way or another, and you couldn’t say that about many of the boats I encountered!

You’ll appreciate that my time with Mitchells was over 35 years ago – I was 24 when I first joined them as sales manager (to save you the mental arithmetic that makes me 62 going on 63 now!) and memories fade… although a few things do stick in your mind!

First of all, I’ve managed to find, scan and attach a few negs of Mitchells in 1972, they seem to be the only pics I took so I can only suppose I was too busy sailing to take many photos!

The Barbary afloat is ‘Balchis’, she is lying on one of our old moorings at the edge of the deep water channel near Parkstone Bay between completion and acceptance trials, I would think very early in ’72 as I recall that I delivered her to Brixham in March or perhaps April of that year. The last time I saw this piece of water it was more like a car park… ! (The pic of the transom shows a problem we never solved… exhaust stains!)

The inside photos including an almost complete Barbary show what I think is the next boat in line, although I can’t remember her name. Judging from the negative numbers I think the bare shell in the photos would be the one after that, showing the mouldings as received from Robert (‘Bob’) Ives in Christchurch.

The other pics show the construction shed – which you wouldn’t really describe as a production line! There were usually a couple of the 21ft ‘Parkstone Bay’ motor boats (lovely little seamanlike boats) under construction: one Barbary nearly complete and one set of mouldings just arrived. There would probably also have been a complete Barbary afloat, either on trials, awaiting acceptance or just departed. The gentleman walking towards the camera in one shot is Ewart Redwood, one of the directors at the time (the other was Len Mitchell).

To try to answer you questions:

When did they start building? Not sure, I think a couple of years before I joined – 1969/70?
How many a year? Again not certain – I was paid on commission when completed and I think that I had a Barbaryabout every three months, or just under. Say about 5 or 6 a year? (To tell the truth this was a bit embarrassing – ‘selling’ Barbarys was more a matter of forming an orderly queue and running through the options list…!)
How many under construction at a given time? Not a production line in the modern sense – perhaps one nearly complete or afloat awaiting trials; one well under way and a set of mouldings ordered orjust delivered.
A range of 21ft ‘Parkstone Bay’ motor boats was the bread-and-butter of the yard at the time – GRP hulls and mahogany or GRP upperworks in three styles; seamanlike displacement hulls; range of diesels engines, mainly Saab or the same Mercedes OM636 as per the Barbary.
Robert Ives of Christchurch supplied the bare mouldings for Barbary hull and deck and Parkstone Bay hulls. They did not build (ie complete) any.
After I left I think Mitchells buit a few 42ft ‘Atlantic’ ketches on Bob Ives’ hulls – designed by Tom Rayner and previously built entirely of wood by various builders. This was the design from which the Barbary evolved – although Len Mitchell had a wooden ketch called ‘Parkstone Bay’ which was pretty much a half-way house between Atlantic and Barbary

Incidentally there was also a full wheelhouse version with a completely wood superstructure on a Bob Ives Barbary hull called the ‘Magellan’ and built at Appledore on the north coast of Devon not many were built.  Sorry, I can’t recall the builder’s name.

Hopefully Mike will recall more about this era and send us some more gems.