Most of the following information is supplied by Andrew McEwen who owns a Parkstone Bay Motor Boat.

Apart from the Barbary Ketch, there was also the TradeWind, and the Parkstone Bay Motor boats, and any other one-offs that Fred or, later on, his son, Len built.  The Parkstone Bay motor boats were mainly the 21 foot version, with at least 3 cabin/cockpit layouts, though there were a number of 28’s. built, some single-screw, some twin-screw.

Engines were often MB 42 HPs, or sometimes Sabb.  NB It’s Sabb, (norwegian) NOT a Saab.  (Swedish) note the spelling.  Trust me, we had one …. and that’s a different story !

Mitchell was a Mercedes agent which is why he put them into his boats as a preference. He must have had loads of the 42 HP  because they went into Barbary Ketches/ Sloops, as well as PB 21s.  42 HP in a 21 footer is vastly over-powered! The PB 28 usually had either 1 or sometimes 2 of the same engine, depending on the configuration.

My paternal grandfather retired to Poole from London in 1938, and knew Fred Mitchell very well.  My father was good friends with the son, Len , who took over the business. I don’t know what happened to any other sons, but Len only had daughters, neither of whom went into building boats.   I fear that all records/Archives are long since lost. 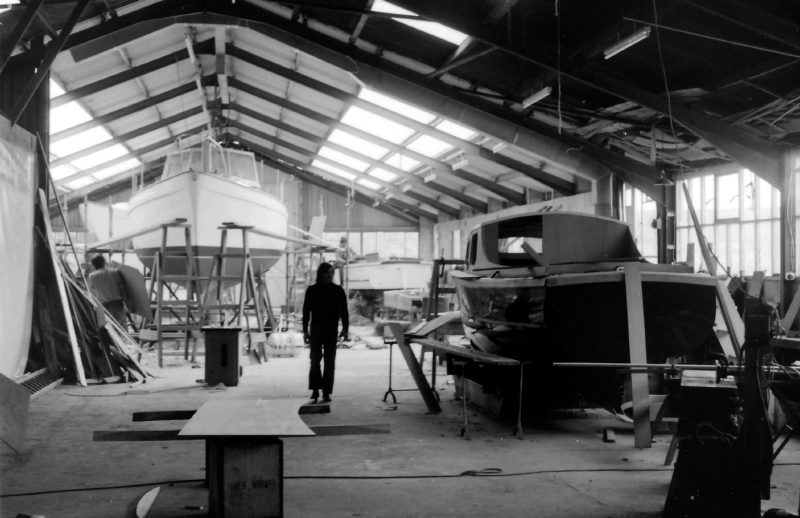 Yes the motor boat stern on in your photos (reproduced above)  is indeed a PB 21.  You can tell by the fact that there are 2 window holes in the cabin sides that she was destined to be a Sea Fisher or Kingfisher (the latter had a higher level of trim).  PB21s came in a number of options – some were only completed as open workboats, sometimes with an engine as small as a Stuart Turner 8 or 10 HP.  The cabin cruisers are distinguished by the number of windows in the cabin sides, excluding any wheelhouse. (The wheelhouse obviously hasn’t yet been fitted to the one in the picture; it’s also possible that the owner hadn’t asked for one).  One cabin window/long cockpit = Sea Troll (very basic interior, including slatted seats rather than berths), or Sea Horse (better level of trim); 2 cabin windows/ mid-length cockpit = Sea Fisher or Kingfisher, these had room for a little galley and a sea toilet; 3 cabin windows/ short cockpit = Sea Cruiser.  They didn’t make many Sea Cruisers, I suspect because the additional cabin space wasn’t very well thought-out.
Andrew McEwen

3 Responses to Other Mitchell boats